After managing to address key issues during the transfer window, the confidence in the Liverpool camp was just oozing out even before a ball was kicked.

With the likes of Alisson Becker, Naby Keita, Fabinho and Shaqiri coming in, Liverpool have turned themselves into a real force this season and are challenging for major honors both domestically and in Europe.

Even the injuries haven’t slowed this side down as the Reds have kept going at full steam even with the likes of Joe Gomez, Trent Alexander-Arnold and Gini Wijnaldum joining Alex Oxlade-Chamberlain on the sidelines recently.

Chamberlain especially had a rough 2018 and missed out on the Champions League final after injuring his knee during the semi-final clash with Roma in April.

During his time on the treatment table, the former Arsenal man seems to have struck quite a chord with fellow crocked teammate Rhian Brewster and took to Instagram to share a photo with the youngster after a session at the club gym.

But while fans loved to see a new bromance brewing within the squad, they seemed quite shocked after noticing the huge scar on Chamberlain’s leg.

The gnarly scar is testament to the seriousness of the midfielder’s injury and to see the Ox recover ahead of schedule from such a difficult injury should definitely motivate the Reds to keep doing better on the field.

Jurgen Klopp also seemed quite delighted with his progress during a recent presser and seemed to suggest that a comeback maybe on for Oxlade-Chamberlain this season if he keeps recovering at the current pace.

After not quite hitting the heights that was expected of him at Arsenal, the England international had moved to Anfield to salvage his career and was just hitting top gear in Red when the unfortunate injury happened.

But after battling it out with such a severe setback, the Ox may return to the pitch stronger and better than before as he looks to leave his mark at the club.

Straight out of a horror movie . Check out the scary looking scar on Chamberlain’s leg here : 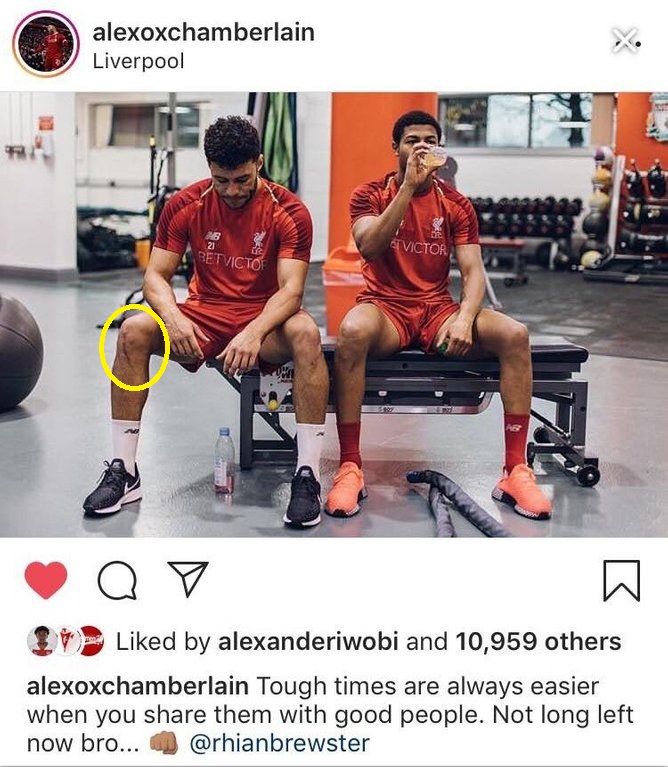