A prophecy had been written that day. One day, a messiah will be born with a ball at his feet. He will then grow up to conquer the world of football.

Lionel Messi is a name that has struck terror in the hearts of defenders all over Europe. Ever since the Argentinian made his debut with FC Barcelona, the talismanic striker has been nothing short of excellent. As such, fans of the pint-sized Argentinian have long taken to Twitter to express their admiration for Barcelona’s #10.

All bets are off when the ball is at the feet of Lionel Messi. As such, opposition managers have long adopted the Indian local train methods, when it comes to shutting out the striker. Left short of choices, opposition managers have often relied on crowding out the Argentinian, with hopes of success. A classic example was on show during their recent outing against Real Betis – 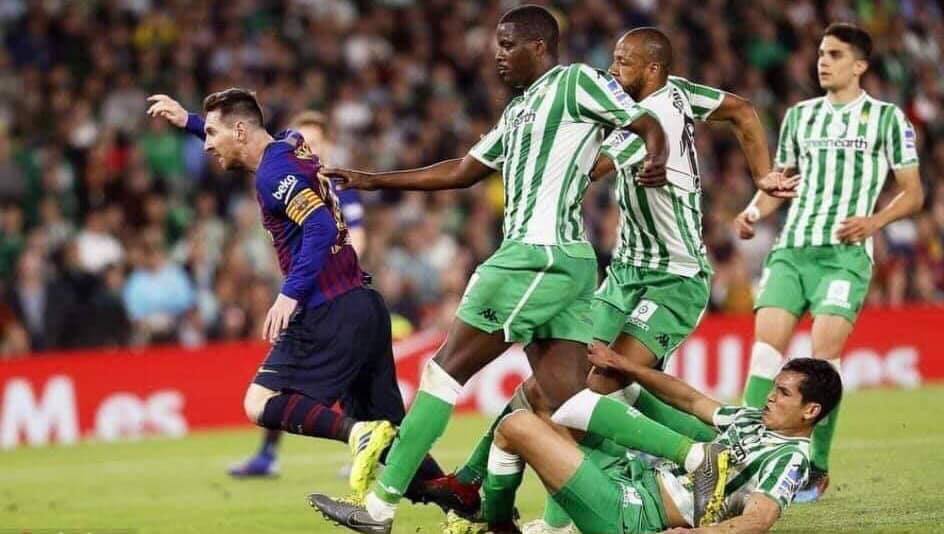 The thing is that trying to pacify a player who was born with the ball at his feet and was blessed by the god of football himself is like trying to placate a saint with two guns. Does it work? The jury’s still out.

It may very well seem that Lionel Messi was not made for football. But football was made for Lionel Messi. Such is the gravity of the skill of the player that opposition managers have to rely on over four people to mark the Argentinian.

All we can say to the four people earmarked to crowd him out in the future is this – good luck.

Let Jst talk abt people not an alien, in d world of football,nva in history to see someone lyk messi again bcz messi is football nd football is messi,
take d scoring,dribbles,passes,asist,set piece,ball control nd all techniques of pele ,maradona ,zidane , romario & co, u will notice messi is 9 steps ahead of them, i am glad to witness the era of d G.O.A.T LEONEL MESSI nd long live d KING