As Liverpool lost to Manchester City in a fiercely fought match at Etihad Stadium, both fanbases went online to debate the outcome. Prime among the topics discussed were the goal-line technology decision that ruled out Mane’s effort and Vincent Kompany’s challenge on Mohamed Salah.

While City and Liverpool fans went toe-to-toe on social media, Arsenal forward Alexandre Lacazette was also spotted being active on Twitter after the game.

Arsenal fans, who were naturally happy with the result as it effectively protects their “Invincibles” title, became elated to see their forward Lacazette like a post on Twitter which celebrated the Liverpool loss with a headline “And still only one Invincible team.”

With Liverpool’s undefeated run in Premier League coming to an end, Arsenal fans are relishing it as a way of getting back at the Reds fans, who had won the bragging rights when the two teams last met on 29th December 2018 at Anfield.

Check out a screenshot of Lacazette’s Twitter activity below – 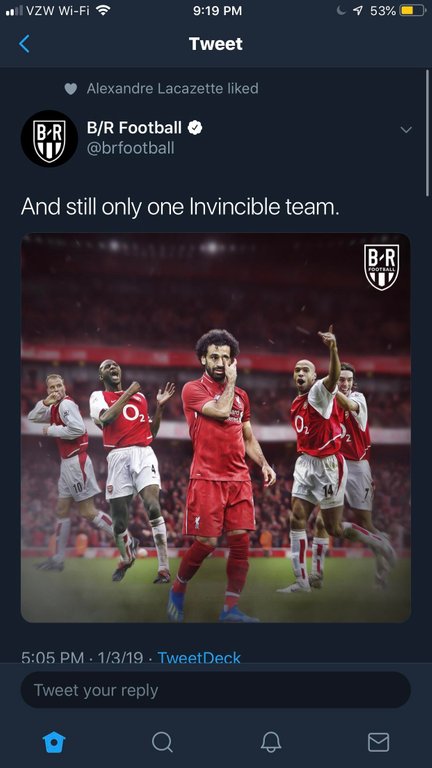 Some Liverpool players got ahead of themselves by suggesting they could be the next Invincibles. Did that put some pressure on the team? I think so....and unnecessarily/