It is possibly the toughest job in the world of football. Unforgiving, relentless, and widely considered the most important job in football; we are talking about the goalkeeper’s position. The game can be glorious and cruel for the ‘keeper, and it can all change in a matter of moments.

Always under the spotlight, a goalkeeper’s performance is vital to the team’s performance. Called into action at crucial times, pulling off blinding saves to keep their team in the lead or in the game, their job must not be looked down upon. A goalkeepers’ life is such that the world celebrates with them when they pull off a great save; but they stand alone in condemnation when they make a mistake and cost the game.

Spoken of in high regard as one of the best ‘keepers’ in the world, Man Utd ‘keeper David De Gea’s (DDG) rise to the top is inspiring. From a lanky lad from Spain to possibly the best shot-stopper in the world right now, De Gea has seen it all. World-class saves and jaw-dropping performances seem to be his definition of “normal”. But, he has also had his fair share of howlers.

DDG was culpable for Barcelona’s second goal against United in the clash between the giants at the Nou Camp in the CL quarter-final second leg. Leo Messi’s right footed attempt crept under the Spaniard and rolled into the goal, blowing the roof off the stadium. On the one side, the Catalans were on cloud nine; on the other, DDG and United stood devastated, looking at elimination.

If there’s anyone who can understand the emotions DDG was going through, it was another goalkeeper.

Marc-Andre Ter Stegen was in goal for Barca when the catastrophe took place. The German’s reaction to what unfolded was amazing.

Videos show him not react at all to the goal, even though it asserted Barca’s dominance. He is seen having a sip of water as his teammates celebrated.

Also worth mentioning is that Ter Stegen requested the Barca fans to stop singing ill of DDG and his howler. It really was a class act from the Barca custodian. 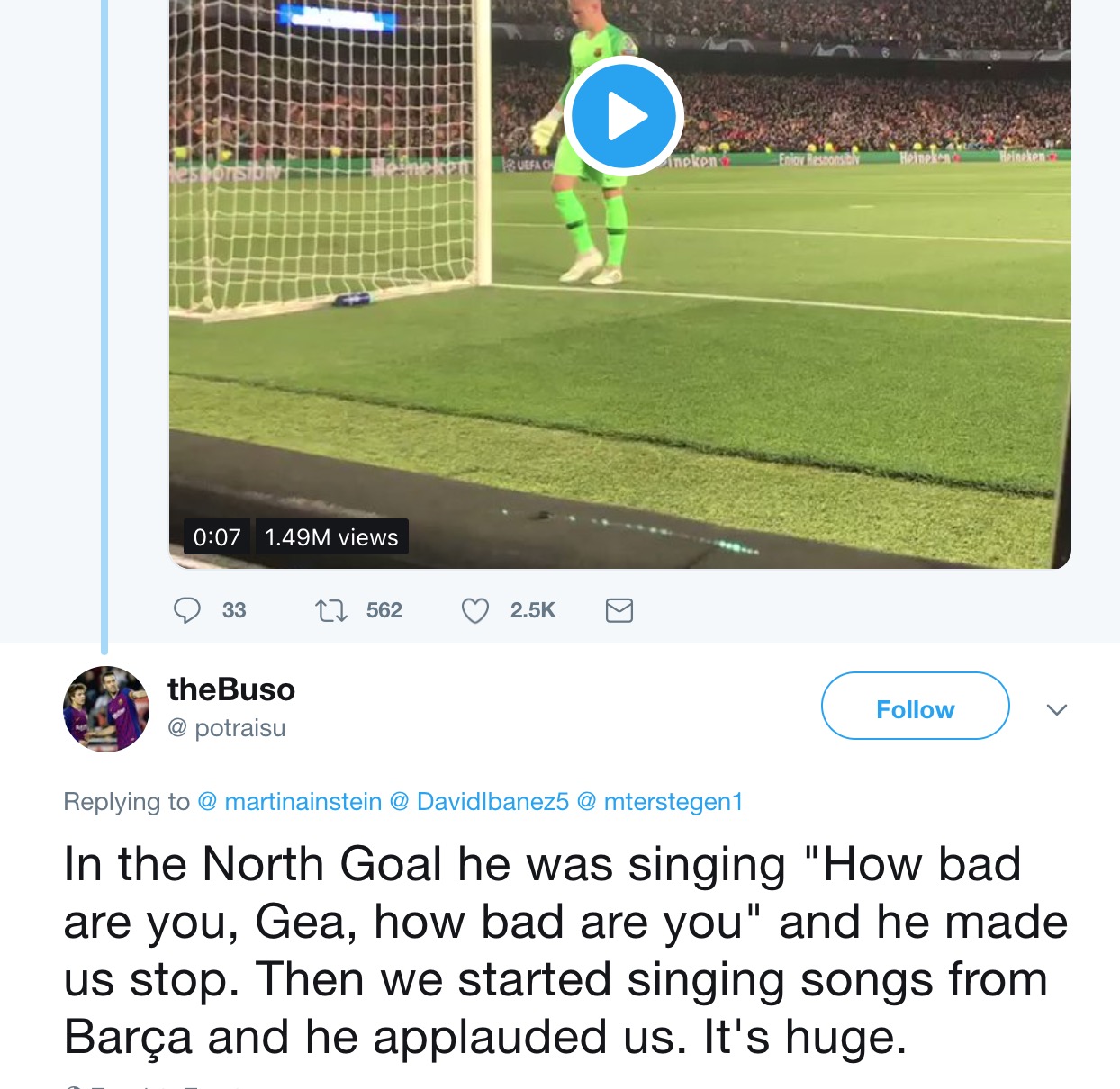 He mentioned in a post match interview that he chose not to celebrate as that sort of mistake can happen to him as well, and he empathized with De Gea. He also praised DDG by labeling him as “one of the best in the world”. His response to the entire situation was just magnificent. Champion-like behavior from a serial winner, chasing success on multiple fronts this season. This also begs the question: Who’s the better ‘keeper – De Gea or Ter Stegen?